My friends and I affectionately refer to the great German philosopher Arthur Schopenhauer as “The Schope.” His pessimism and his troubled life, coupled with his profound reflections on the nature of human suffering, make him, on the one hand, among the most dark and depressing of all philosophers. Yet he also has a side that is light-hearted, humorous and unexpectedly positive. Add to all of this his clear writing and playfulness and you will start to understand why so many people have such affection for The Schope.

A few years ago, I greatly enjoyed reading the monumental The World as Will and Representation, and it has been a pleasure for me recently to once again encounter some of Schopenhauer’s shorter writings at the prompting of one of my current students. As part of an independent study, this student and I have been studying a collection titled Essays and Aphorisms, which contains essays taken from a longer work titled Parerga and Paralipomena. The Shope is, once again, having an effect on me.

Carl Jung once claimed that he had never encountered a patient over the age of 40 whose neuroses were not attributable to the fear of death. I’m currently 47, and that might explain why I’m so neurotic, but I don’t really think this is the entire explanation. Death anxiety has been something that seems to have haunted me ever since I was a teenager. When I was 13 years old, I recall lying in bed and realizing that my pet rat, Wilfy, was going to die. This led me to think about the fact that my parents, likewise, would one day die, which finally led me to the realization that I too would one day die. As I lay there, alone and in the dark, eyes open to the night staring at the nothingness around me, the cruel logic of life and death played itself out in my mind. All creatures, both human and non-human, are thrown into the world, born to suffer and then pass away. Nothing is permanent as the world cycles on and on and on. What seems so important to us right now will soon pass into nothingness, ultimately to be forgotten. Everything that exists is just a “blip” on the screen of Being. The aloneness that I felt at that moment is a feeling that has never left me, and it may be one of the reasons that I resonate so much with the insights of Shopenhauer.

Schopenhauer struggled with these same thoughts. He writes, in The World as Will and Representation, that among all of the creatures in existence, humans suffer the most. This is so because we are psychologically complicated, processing our awareness of the world through a manifold of mental lenses that break reality up according to the principles of space, time and causality. In so doing, we experience the world as a flowing process that starts with our birth and that inevitably tumbles toward our extinction. This is a phenomenon that Martin Heidegger would later call “being-toward-death”; the awareness at every moment of our lives that we are destined to die. It colors all of our experiences and lends a tragic backdrop to everything that we do. But whereas Heidegger counsels us to grab hold of our lives, recognize our being-toward-death and use it as a reminder of who we are and how little time we have to accomplish our existential goals, Schopenhauer instead suggests that we should turn against the “will-to-live” and resign ourselves to the infinite by giving up on the pursuit of goals altogether. We should cease to assert out individual wills and instead allow ourselves to identify with the grand rhythms of the universe as a whole. In so doing, peace and serenity might be achieved in the manner of Stoic/Hindu/Buddhist resignation.

While Schopenhauer’s advice to give up on the will-to-live may seem bleak and passively nihilistic, it can also be oddly comforting. In his essay titled “On the Indestructibility of Our Essential Being by Death,” he details how it is that in the very act of resigning one’s self to the meaningless and absurd nature of the phenomenal world’s impermanence, we may potentially discover a deeper well of inner stability that is eternal and unchanging:

The more you become conscious of the frailty, vanity and dream-like quality of all things, the more clearly will you also become conscious of the eternity of your own inner being; because it is only in contrast to this that the aforesaid quality of things becomes evident, just as you percieve the speed at which a ship is going only when looking at the motionless shore, not when looking at the ship itself. (section 5)

Schopenhauer’s point is that we become aware of the impermanent nature of the empirical, outer world only by way of contrast with our own stable, inner conscious perspective. If that perspective were always changing as well, then there would be no way to gauge – and no reason to mourn – the changes taking place around us. Our very ability to think in terms of the passage of time, then, reveals something stable within us that is unchanging. According to Schopenhauer (and to Stoics and Hindus) this unchanging reality within us is in fact the primal force of the universe itself. Schopenhauer calls this force “Will.” Everything that exists, including human beings, is a manifestation of the universal Will.

Fear of death, Schopenhauer tells us, evaporates when we understand that we ourselves are this Will. Hindus use the analogy of an ocean to make a similar point. If the universe is the ocean as a whole, then we can be thought of as the waves on the surface of the ocean. We might feel as if we are separate and unique, but in fact we owe our existence to a common underlying source. Just as a wave arises from and then disappears back into the ocean, so too do we arise from and then disappear back into Being itself. From our individual human perspectives – through which the world unfolds according to the principles of time, space and causality – we can’t understand the unchanging nature of the primal Will. From the perspective of eternity, however, there are no individuals. There is only the Will in its various modes and manifestations. When this is grasped, Schopenhauer tells us, death is revealed as an illusion. Beyond the veil of phenomenal appearances, nothing really dies. Being itself is indestructible, and if we can identify with Being rather than with our empirical selves, then we can finally grasp that our essential being, which is simply the universe itself, is indestructible and eternal:

One can thus regard every human being from two opposed viewpoints. From the one he is the fleeting individual, burdened with error and sorrow and with a beginning and an end in time; from the other he is the indestructible primal being which is objectified in everything that exists. (section 7)

I like the way that Schopenhauer ends this essay. He transitions into a dialogue format, anticipating the objections that some people might have to his proposed “solution” to the fear of death. The character of Thrasymachus appears, objecting that absorption into the universal and eternal Will is no consolation for the loss of his own individual identity upon death. “I want to exist!” he exclaims.

I have to admit that I agree with Thrasymachus. I want to be me, not the universe. My fear of death originates with my fear of personal extinction. I can’t pretend to take a perspective apart from my own individual and finite being. I can’t stand above and beyond my own consciousness in order to identify with infinity. I identify with with me, not with the universe; at least as long as I am here. Maybe things will change once I die, but that hasn’t happened yet.

Good try, Schope, but I’m not yet convinced. 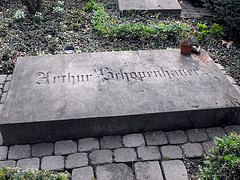