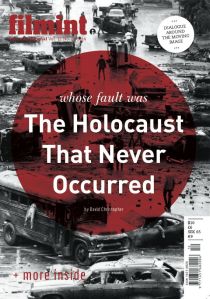 My paper, “Scotland as a Site of Sacrifice,” appears in the latest issue of Film International (Volume 12, Number 2, June 2014). The journal is available from Intellect Publishing:

Friedrich Nietzsche delineates three stages of sacrificial behavior. The first stage consists of the sacrifice of particular human beings to a god. The second stage involves the sacrifice of one’s own instincts to a god, and the third stage culminates in the sacrifice of God himself. This last stage describes the death of God and signals the “final cruelty” of our present times. Our age is the age of nihilism, the point in history during which humans “sacrifice God for the nothing,” fulfilling a kind of nihilistic sacrifice.

In this paper I examine three different cinematic depictions of sacrifice, two of which clearly illustrate Nietzsche’s first two stages and the last of which suggests the possibility of the third, nihilistic stage. The films I have selected all share a common thread insofar as they all take place in Scotland. The first two films, The Wicker Man (Robin Hardy, 1973) and Breaking the Waves (Lars Von Trier, 1996), take place in rural, northern Scotland, capitalizing on what scholars have called the myths of Tartantry and the Kailyard in order to depict sacrifice as something disengaged from the modern world. The third film, NEDs (Peter Mullan, 2010), takes place in modern Glasgow and draws on a myth that scholars call Clydesideism. This myth highlights the postindustrial, gritty, urban face of Scotland. In NEDs, the sacrifice made by the main character is of a sort thinkable only in modern times and in an urban setting, and it comes very close to what may be a kind of nihilistic sacrifice.