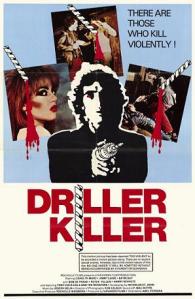 Abel Ferrara’s 1979 movie Driller Killer is a notorious cult horror film, included on the “video nasties” list of banned films in the UK, and long available in the US on VHS and DVD only in an edited, incomplete version. Now, with the wonders of on- demand TV, Driller Killer (like so much hard-to-find entertainment) can be directly piped, uncut, right into your own home. Is this a sign of social progress, or yet another symptom of the decline of Western Civilization? I’ll leave that for you to decide.

Having waited to see this movie for so long, I was concerned that it would turn out to be as tritely obnoxious and aesthetically worthless as some outraged critics have claimed. Instead, Driller Killer turns out to be an unusually complicated horror film that is both gruesome and psychologically interesting.

Set in 1970’s New York City, the aesthetic of Driller Killer is pure punk. The titles and credits have a homemade look, and the film opens with a typically punk rock message: “This film should be played loud.” Max’s Kansas City, the legendary New York punk club, is prominently featured as a location where a band called the Roosters (with Tony Coca-cola as the frontman) is central to the unfolding, gory events. Throughout the film, the main characters all exhibit that blank, vaguely confused, and periodically hostile way of acting typical of early east coast punk and new wave. The locations are all run-down, and the characters unglamorous.

The New York depicted in Driller Killer is not the affluent, touristy New York City of today. It is the New York of Taxi Driver and Maniac. It is the “old” New York sung about by Agnostic Front. It is the New York City that I recall from the early 1980’s when I visited my friend who was attending art school in Brooklyn. During that visit, I fondly remember seeing Killdozer perform at CBGB’s, and listening to local punk bands at some nameless warehouse before wandering back to my friend’s cockroach infested apartment, cutting through the terrifyingly dangerous streets of Bedford Stuyvesant. At night, there were garbage cans on fire, illuminating the dark streets. There was graffiti all over the subway trains. Hucksters and scam artists were on all the street corners. It felt as if everyone was out to exploit someone, somehow. It was a place much different from the New York City that I’ve visited in recent times, which feels more like a safely monitored amusement park than the gritty, dangerous metropolis that appears in Driller Killer.

Driller Killer tells the story of an artist named Reno Miller (played by Abel Ferrara, but credited as Jimmy Laine) who lives in a small New York apartment with two women, Carol Slaughter (Carolyn Marz) and Pamela (Baybi Day). While it appears that Reno and Carol have some sort of romantic connection, it is instead Carol and Pamela who are sexually intimate with one another. Reno, on the other hand, is depicted as virtually asexual, more interested in working on his paintings than he is in romance, music or socializing with others. In particular, he is obsessed with the completion of a painting of a buffalo, which he is convinced will make him rich and famous. However, his work on this painting is constantly interrupted by the Roosters, who practice in one of the adjoining apartments. Because of the constant punk rock music disturbing his concentration and sleep, Reno becomes progressively more and more unhinged, until he snaps and embarks on a killing spree with a power drill.

All of this makes Driller Killer sound like a piece of conventional exploitation. What lifts it above other, less interesting films of the genre, however, are the themes that Abel Ferrara weaves together as he explores the psychological disintegration of the main character.

The first of these themes has to do with homelessness. The opening scene has Reno being summoned to a church, where nuns have discovered a homeless man mutely sitting in the pews. In this man’s pocket is Reno’s contact information. But upon arrival, Reno has no knowledge of who this person is. When he tries to talk with the man, the homeless person grabs his hand, sending Reno into an unreasonable panic. The mystery of this scene is never fully resolved, but later in the movie we find that Reno is in the habit of hanging out with homeless people on the streets, sketching them and drinking with them. It seems that Abel Ferrara wants to suggest that this main character both identifies with the rootless isolation of the homeless at the same time that he is also repelled by this very same quality. In the homeless, he sees something of himself; something that he fears and wants to destroy. In fact, when he goes on his killing spree, his violence is largely directed toward familiar homeless people in his neighborhood rather than against the members of the noisy punk band who disturb his work or the apartment manager who threatens him with eviction.

The theme of passivity is connected to the images of homelessness. As mentioned above, Reno is depicted as virtually asexual. He is more concerned with his artwork than he is with his girlfriend, and this seems to be indicative of his own passive, impotent nature. As the only male member of his household, he is unable to pay the rent. In order to avoid eviction, Carol has to rely on alimony and other money that she borrows from her ex-husband, thus also relegating Reno to dependent status.  Additionally, even though he is being driven crazy by the constant music that disturbs his work, Reno never has the courage to confront the band members, but instead befriends them and even agrees to paint a portrait of the lead singer, Tony Coca-cola. So although it is clear that Reno is an angry man, he is passively reliant on the people around him and unable to assert himself. At one point, Pamela naively says to Reno that he should let the gallery owner who is interested in his paintings “stick it up your ass,” further suggesting that Reno is by nature passive and submissive. This passivity is symbolized at one point by a skinned rabbit that his landlord gives to him, apparently aware that Reno is unable to provide food for the household. Like a rabbit, Reno is skittish and vulnerable – gutless – and he seems to become consciously aware of this vulnerability when he is alone with the wet, bloody, skinny body of the rodent. Instead of eating it, Reno begins to stab the rabbit in the head until it is broken and destroyed. This seems to be a foreshadowing of his attacks upon humans with his power drill.

Woven into all of this is the buffalo painting that consumes Reno’s attention. He is convinced that this painting will be his masterpiece, but he is unable to let it go, feeling as if it always needs more work, despite the fact that the gallery owner and Carol keep pestering him to finish it. There are points when Reno seems hostile toward the painting, as though he is intimidated by it. He threatens  to stab it in the eye, but then apologizes to the painting, saying that he would never harm it. The buffalo appears as an image that is contrary to that of the rabbit. Whereas the rabbit represents Reno’s timidity and weakness, the buffalo represents his urge toward strength and aggression. He finds it difficult to let go of the painting precisely because he is unsure of his own powers, and as it turns out, he is correct to be hesitant. For when he does deliver the finished piece, the gallery owner is unimpressed, insulting the artist’s talents and telling him that his work has been in vain. He has lost his creative powers. The buffalo is a failure, and now Reno has nothing to hide behind. He is unable to conceal his impotence.

The use of a drill as a murder weapon clearly evokes phallic symbolism. As Reno stalks the gritty streets of New York, he attacks mostly homeless men, stabbing their torsos with his drill and occasionally also drilling them in their heads; just as he had stabbed the skinned rabbit in its head and as he had threatened to stab his buffalo painting in the eye. With this murder spree, Reno attempts to kill that rootless, vulnerable part of himself that he sees reflected in street people. The use of the drill is an exaggerated way to emphasize his own desperate desire to be a masculine, dominant, and potent male. Once his confidence in his own power is solidified by killing the vulnerable, he turns his murderous rage toward those who actually do possess the power to threaten his masculinity: the gallery owner and Carol’s ex-husband.

The gallery owner is the person Pamela had suggested Reno let screw him in the ass, and so by murdering him, Reno reasserts his own dominance. This murder results in a sort of crucifixion, as the body is pierced and held in place up against a door in a pose reminiscent of the dead Christ. This draws the audience’s minds back to the opening scene of the film, which takes place in a Catholic church; the place where Reno first panicked when grabbed by the homeless man. It also recalls an early scene – a foreshadowing this gruesome climax –in which Reno helps Pamela drill holes in this very same door frame.

The film ends when Carol leaves Reno, returning to her ex-husband. Reno follows her to the couple’s house and murders her ex-husband with his drill. He then waits for Carol beneath the sheets in the couple’s darkened bedroom. In the closing scene, unaware of Reno’s presence, Carol slips into bed, thinking that she is next to her ex-husband. Thus, Reno finally triumphs. He has taken back his girlfriend and presumably will now finally reassert his sexual virility.

I’m glad that when I finally did get to see Driller Killer, it was in its original, unedited version as intended by the director. I find it ironic that while in years past this movie was either banned or heavily censored, today I can watch the fully intact scenes of sex, violence and abjection at home, on demand, in the coziness of my own living room. The wonders of modern technology have preserved and made widely accessible this (and other) masterpiece(s) of low-budget, low-tech horror so that simply by turning on the television set, you or your children can freely view material previously considered obscene, vile and damaging to the moral health of film goers.