Sacripolitical will appear with Blackplate at The Makeout Room in San Francisco on January 4th, 2020. Doors open at 6pm and the show runs from 7 to 9:30pm.

Come learn the truth of sacripolitics. 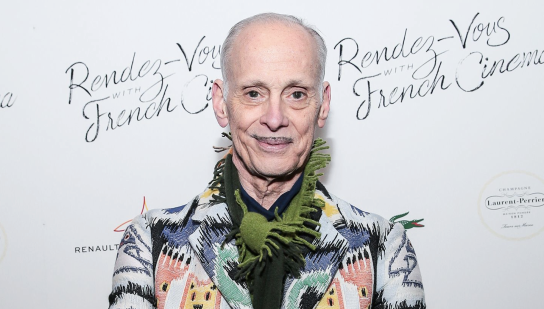 Dressed in a tasteless, multi-colored suit, my hero John Waters took to the stage at San Francisco’s Great American Music Hall to perform his Christmas-themed stand-up  comedy routine on December 4th. It was a sold-out show attended by all sorts of oddballs, including me and my wife.

This was only the second time that I had seen Waters live. His San Francisco appearances sell-out quickly, so this year I bought tickets months in advance, determined not to miss the boat. At almost $70 a piece it wasn’t cheap, but I’ve no regrets. The show was hilarious and served as a welcome mood-lifter to my wintertime despair.

What I have always loved about John Waters is his defiant sarcasm toward both right- and left-leaning dogmatists. He gleefully pokes fun at conservatives and radicals alike, mocking and ridiculing them for their self-righteousness and over-seriousness. His mockery has not abated now that he is a senior citizen. If anything, he has become even more filthy and confrontational. I found myself thinking during this latest performance how much I respect the way that Waters has managed to live his life by making his own rules, somehow even getting the institutions he lampoons to embrace and support him. He often says he hasn’t changed at all over the course of his career; it is the world that has changed around him, allowing him to cash-in on making films and telling jokes that used to get him thrown in jail. This is a man who went from underground infamy – making films like Pink Flamingos – to mainstream success – with a film like Hairspray. Now, even Nike shoes has hired him to endorse their products!

The jokes Waters told during the course of his hour-and-a-half-long show were delivered in the form of a monlogue, which he sometimes stumbled through in a clumsy manner that only made me like him more. At a couple of points, he lost his place in the memorized routine, checking with the audience to confirm that he had already covered certain topics. It was almost like watching one of his early, grade-Z movies unfolding right before my eyes, live on stage. Nevertheless, he looked right at home, trusting the crowd, all the while appearing very comfortable and certain that he was among people who understood and loved him. And of course he was right. We were all with him, excited to hear what he would say next and entirely delighted by his mere presence.

The theme he developed throughout his routine concerned how we must make Christmas filthy and weird. Halloween, he suggested, has already been overtaken by freaks and weirdoes. Let’s do the same for Christmas! We can go caroling in Easter bunny suits, instruct our kids to piss on Santa’s lap, insist on decorating our houses with the most hazardous sorts of trees, and send filthy, home-made cards to our friends and neighbors. At holiday work parties, ask your co-workers to ejaculate on your face, then go outside, let it freeze in place and return to the party telling everyone that you’re a snowman! While developing ideas for these alternative Christmas traditions, Waters speculated on the sex-life of Mr. and Mrs. Santa Claus, extolled the virtues of gay sex, imagined what Donald Trump’s untrimmed bush must look like, and mocked feminists and left-wing activists who were overly sensitive about the use of words and phrases like “manhole cover.” He ended his monologue with a tale in which he was eaten, digested and shit out by one of his fans. Afterwards, there was a question and answer session during which Waters told stories about Divine, his parents, and his experiences making movies with stars like Kathleen Turner.

I left the venue with a renewed feeling of good cheer and a mischievous holiday spirit. As my wife and I walked past drug dealers, homeless people and strip clubs on our way back to the car, I reflected on how I, like John Waters, also want to remain unashamedly irreverent and defiant of mainstream norms into my old age. And I want someone to pay me for it.