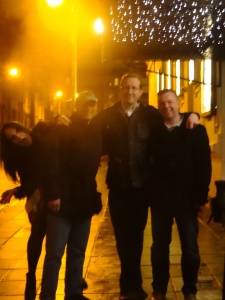 Glasgow is a city with more than enough nightlife to keep a visitor engaged once the sun goes down. There are vast numbers of pubs, bars and restaurants, as well as a vital arts scene that assures a good selection of music and live theater almost every night of the week. While I was there, the city center was vibrant and active well into the early hours of the morning, even on Sundays when the weather was horrible and I imagined that locals should be deep in slumber before the start of the work week. Who needs sleep anyway!

The center of neighborhood nightlife, for better or worse, is the pub. I write “for better or for worse” because I found, over the course of the month and a half I was in Glasgow, that the steady stream of alcohol fueling Scottish nightlife quickly wore me down. I’m not normally a drinker, but since the pub is the neighborhood meeting place, drinking is a central, and daily, activity that is hard to avoid. Scarlet Johansson, while she was in Glasgow filming Under the Skin, noted that the city has a real “drinking culture,” and this is true. Scotland has the 8th highest level of alcohol consumption in the world, which contributes to something known as the “Glasgow Effect;” a name given to the fact that those living in and around the city have significantly higher rates of physical and psychological morbidity than people living in other parts of the UK.

Nonetheless, there is something appealing about walking down the street for a pint and being able to socialize with neighbors and their dogs. Yes: the family pet is welcome to hang out along with everyone else at the local pub, since in addition to a drinking culture, Glasgow has a real dog culture as well. If you don’t like dogs, then this is not a place for you to be.

I discovered more evidence of how important drinking is to Glaswegians when I went out with my nephew one night to the West End for dinner. After having a meal at an Italian restaurant, our first stop was a place called The Lane Bar, which occupies part of a converted movie theater. After that we stopped at The Book Club and then ended up at Oran Mor, which is a bar in a converted Church. All of these places were busy and crowded with hipsters having a raucous and loud Saturday night. This is not unusual in any big city of course. However, what fascinated me was, first of all, that a bar had been incorporated into a movie theatre and, even more, that a Church had been converted into a bar and nightclub. I have seen two other churches in Glasgow that have been converted into apartments and condominiums; which indicates just how far the death of God has progressed in this Scottish city. When churches are converted into bars and living spaces, it seems obvious that religion has lost at least some of its hold on the population. Couple this with the conversion of movie theaters into drinking establishments, and you get a sense of how people’s priorities here have changed. 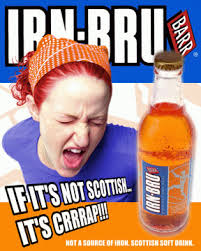 My own favorite Scottish beverage is not whiskey, but Irn Bru, that bright orange-colored, sugary and vaguely citrus-flavored soda possessing pretensions toward somehow being good for you. This is a drink that I never get tired of, and I think that there should be bars established that serve it exclusively. This is, in fact, what I ended up drinking toward the end of most of my nights out. It helped me to flush my system and to wash down the various sorts of deep-fried street foods that are inevitably consumed at the evening’s conclusion; things such as deep-fried potatoes, deep-fried fish, deep-fried haggis and deep-fried sausage. In Glasgow it seems that everyone has their favorite “chippy,” or fish and chip shop, where you can get battered and deep-fried anything, including such bizarre items as deep-fried slices of pizza, meat pies, and of course the infamous “Mars fritter,” a battered and deep-fried candy bar. At the end of a night out on the town, these are the sorts of foods that bring festivities to a close.

I think I experienced something of the “Glasgow Effect” during my stay, as I became very sick for about a week and so missed seeing a couple of bands that I had been looking forward to: Control and The English Beat. Nevertheless, I did get the opportunity to see a couple of other acts, both of which I enjoyed quite a bit. The first was Nathaniel Rateliff, an alternative folk singer from Colorado. This show was at a venue called Broadcast, which is nestled in amongst a number of other small clubs along Sauchiehall Street. The performance space is in a basement underneath the main bar, reminding me of many punk rock clubs from days gone by. The club was packed and the band’s reception was enthusiastic and rowdy. I was surprised that a small, alternative folk band from Colorado would have such a large following here in Glasgow, but it was clear the audience, who stood crushed together while singing along with the lyrics, loved the music. Initially I wasn’t all that excited about it, but as the show progressed, I eventually got into the mood and rhythm the band created. They projected a self-consciously down-home image, with the lead singer sipping whiskey as he drawled on about growing up in the rural countryside, about his great grandfather’s adventures making moonshine, and about his own troubles in love. It was a good act that was entertaining, if not completely convincing.

Later in the month, in connection with the Glasgow Film Festival,  The Homosexuals played at the Center for Contemporary Arts. This was a tremendous show. Originally formed in the mid-1970’s, the first incarnation of The Homosexuals was called The Rejects. They were part of the early wave of British punk rock, playing at the Roxie in London with other legendary acts such as Wire, Sham 69 and Chelsea. I had never heard of them before, and it was only because I had tickets to see a documentary about the life of the lead singer, Bruno Wizard, that I became acquainted with their music while in Scotland. Their sound reminds me of the Buzzcocks, with Bruno Wizard delivering snotty, sing-songy lyrics against a stripped down and raw backdrop of guitar, bass and drums. This is simple, energetic, emotional music from the days when punk was unmarred by commercial aspirations or the desire to please anyone. Watching this band, I was swept away by the driving power of the songs and the passion of the message. Bruno Wizard is a man who has stayed true to his ideals over the course of his life, and his music testifies to this fact. I have not enjoyed a punk show this much for quite some time.

The music scene in Glasgow is quite healthy, even if many Glaswegians are not. I couldn’t help but think how lucky they are to have such a steady stream of great bands playing in their city. After I departed for the US, The Stranglers, Motorhead and Stiff Little Fingers all were scheduled to play. That must be what Sparky Deathcap means when they sing Glasgow is a Punk Rock Town.

In addition to the city’s food, drink and music, I also sampled the local live theater, attending a performance of Glasgow Girls at the Citizens Theatre. Glasgow Girls tells the true story of a group of seven high school students who, in 2005, mounted a campaign in order to keep some of their immigrant classmates from being deported from Scotland. My cousin Amanda, who works doing educational outreach for Glasgow University, supervised Amal, one of the real-life students who appears in the play, so there was a personal connection to this story that made it especially interesting.

In addition to being emotionally moved by the performances, I was fascinated by the cultural references that occurred throughout this play. Glasgow Girls unapologetically caters to the native audience. It is filled with in-jokes and references directed specifically toward Scots. One character is flattered to think that Peter Mullan might portray him in a movie; Glasgow is sung about as being “basically OK”; Robert Burns’ poetry is turned into protest music; public artworks on the road between Glasgow and Edinburgh put in appearances. I found particularly interesting a line spoken by Noreen (played by Myra Mcfadyen), an older woman who is a resident at the public housing complex where Jennifer (played by Karen Fishwick), one of the Glasgow Girls, lives. In response to the young girl’s lament that all her hard work and effort to keep one of her friends from being deported has resulted in failure, Noreen responds, “Well, welcome to Scotland!” The audience responded to this line with uproarious laughter and a round of applause. It is a sentiment that in many ways seems to summarize the Scottish self-image. Whether it is in the realm of politics or sports, cultural recognition or economic development, the Scots see themselves as underdogs who fight against the odds and often fail to triumph in the end.

This last point – about the Scots as underdogs – is one that I encountered continuously during my visit to Scotland. When I was out on the town, in the pubs and at the night spots, I always tried to remember to ask those around me what being Scottish meant to them. Without fail I was told that being Scottish is special. It is an identity unique, precious and difficult all at once. Scots are proud to be Scottish, but they also have a sense of being like the small kid on the block who needs to fight for respect. From the Scottish perspective, life is not a fun game, but an ongoing struggle against forces that continuously threaten to undermine one’s dignity. A history of English domination, bad weather and poor health are just some of the factors that have shaped the Scottish worldview. Through all of this, however, there remains a stubborn resistance against pessimism and despair. To be Scottish involves exercising a sense of ironic and dark humor toward life and everything it throws at you. There is tragedy here, but it is a good-natured tragedy that, even while it recognizes the inevitability of failure, still affirms life as something worth while.