Forbes India has published a list of quotations on the topic of cinema. Alongside Morrison, Zizek, Palin,  Hitchock, Polanski, Lumiere, Fellini and Scorsese there appears a quotation from…Marmysz!

Cinema Uses the Language of Dreams

In the late 1970’s I was introduced to the music of new wave and punk rock. My life, after that, changed forever. In high school I was a misfit, spending most of my time in the library, reading books about mercenaries, bigfoot, and spontaneous human combustion. I didn’t really have many friends, and I rarely socialized with people my own age. The only time that I went out in the evenings was to go see a movie.

I first learned about the band DEVO when my sister and her husband brought me to a midnight showing of The Rocky Horror Picture Show. Before the start of the main feature, a short film of the DEVO song The Day My Baby Gave Me a Surprise was shown. I wasn’t quite sure of what to make of this bizarre piece of raw, edgy music, but it left an impression on me that I could not shake. This inspired me to seek out other similar artists, and thus I discovered bands like The Suburban Lawns, M, Lene Lovitch, The Stranglers, and Blondie. 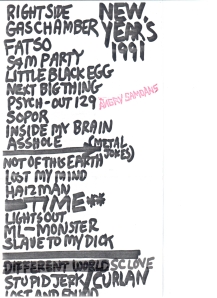 My first introduction to hardcore punk came when my neighbor loaned me The Dead Kennedy’s Fresh Fruit For Rotting Vegetables and The Angry Samoan’s Inside My Brain. It was the Angry Samoan’s record in particular that caused a rush of adrenaline to rise in my system with an intensity I had never before experienced. Here was a kind of viceral, angry, wounded yet smart-alicky music that was a direct mirror of my own teenage angst. The band’s bizarre lyrics and raw musical sound were like sonic illustrations of my inner emotional preoccupations, giving an unashamed and sometimes indecent voice to my sense of alienated anger. The snotty, teenage voice of the lead singer, Metal Mike, was matchless, spewing forth venom over a bare basic musical backdrop of guitar, bass and drums. The music, like the album sleeve, was conveyed in a stark, intense, black and white simplicity. The world of the Angry Samoans was not complicated. The world sucked, people sucked, and together we could confidently yell “fuck off!”

Over the following years, as I became part of a community of like-minded punk rockers, I had the opportunity to see The Angry Samoans play live countless times. I can’t remember the first time that I saw them perform, but the most vivid memories I have are gigs at the I-Beam, in San Francisco, and at Ruthies’ Inn, in Berkeley, where they played to packed houses, provoking the assembled crowds into violent and frenzied slam dancing. The band’s energy was almost overwhelming to the audience, and without participation in the rhythmic marching and aggressive thrashing of bodies in the pit to act as an outlet, it would have been unbearable. There was a power and excitement to these performances that I have never experienced when watching any other band. 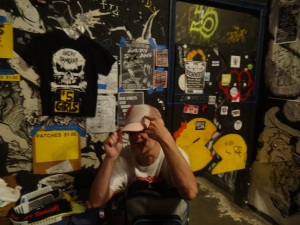 That was over 30 years ago, and the Angry Samoans are still around. The band’s lineup has changed, but Metal Mike is still the anchor point; still singing the same songs and still complaining that his “old man is a fatso.” Their latest performance was at the Gilman Street Project in Berkeley, and I went along with my wife and niece. The show was kicked off by the bands Instant Gratification, Cornelius Asperger and the Bi-curious Unicorns, Oppressed Logic, and the Wasted Ones.

I especially enjoyed Oppressed Logic, a band formed in the mid-90’s with members that gleefully try to offend people’s “PC” sensibilities. Their music is unrelenting in its aggressive intensity, and they really whipped the small crowd into quite a frenzy. Afterwards, I bought one of their CDs, which is really good. It ironically contains numerous anti-Gilman Street lyrics. It seems they have a love/hate relationship with the place.

My wife was eager to see the Wasted Ones, which is a reconstituted version of the early 1980’s LA-based band Wasted Youth (along with members of Circle One). In this incarnation of the band, the previous singer’s son took over as front man, belting out a 20 minute set of songs from the band’s only release, Reagan’s In. Unfortunately, the energy just wasn’t quite right, and the crowd remained rather unimpressed and unmoved (literally). 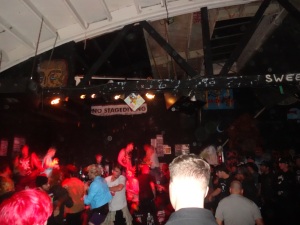 When The Angry Samoans came on, I wanted to feel the same excitement and furious energy that I did when I was a teenager. The truth of the matter is that both the band and I have changed, and thus so has the gestalt that results when I listen to them live. While it was comforting to hear all of the familiar songs – Inside My Brain, My Old Man’s a Fatso, You Stupid Asshole, Steak Knife – the vigor and conviction that I recall from all of those shows in the 1980’s was lacking. This time I stood back at a comfortable distance, watching all of the young punks slam dancing while the older punks steered clear of the pit. The songs were raced through in a perfunctory manner, and Metal Mike handed the microphone over to other members in the band at various points, as though he himself was too tired to belt out the lyrics anymore. The show ended abruptly, and there was an awkward lull during which the audience was unsure if that was the end of it all.

But there was a saving grace that night, demonstrating that everything depends on one’s perspective. My wife’s teenage niece, who came with us to the show, was swept into the pit for her first time. Standing on the sidelines, a young punk grabbed her arm and pulled her into the melee, where she had her first experience with slam dancing, losing her hat, being trampled and then hoisted back to her feet by the other punks in the pit. Afterwards, she was ecstatic. She had been initiated into something that she would never forget, and both my wife and I were quite excited to be there for this important, transitionary event in her life.

An old tradition has a new recruit.